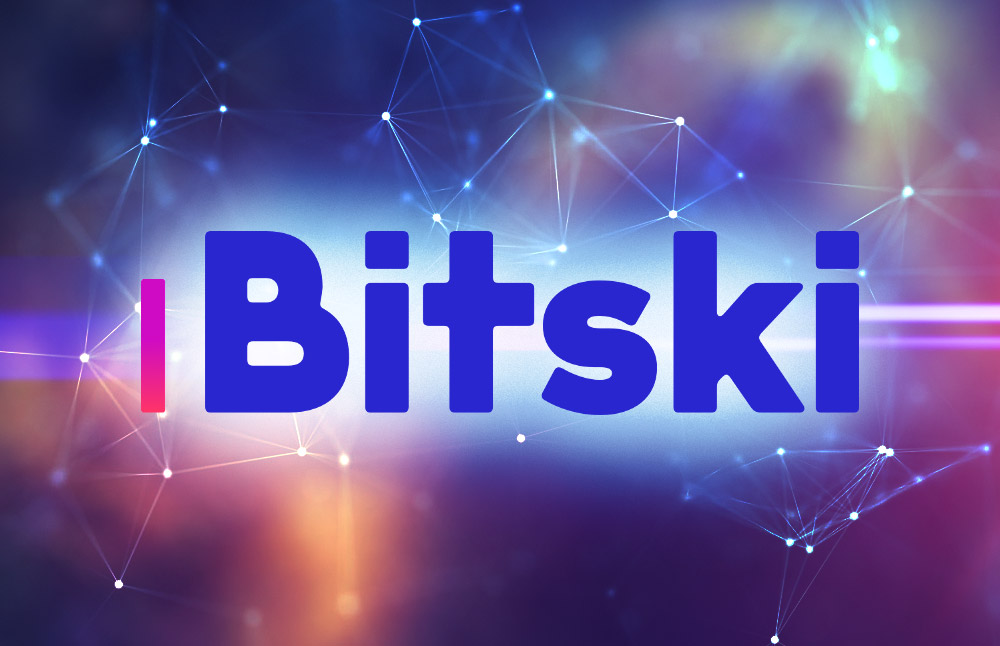 Bitski is a digital wallet built to be used across an unlimited number of Ethereum dApps. Find out everything you need to know about Bitski, a unique, easy to use hardware-secured private key storage solution that offers a single sign-on (SSO) wallet funtionality and how it works today in our review.

Bitski describes itself as “the first digital wallet built for mainstream adoption”. It’s a wallet built for the Ethereum ecosystem. Instead of using a clunky browser extension, hardware wallets, and dApp browsers, you can simply use Bitski, a bank-grade security wallet where your private keys never leave their secure hardware. All you need is an email and password to get started.

Bitski lets you access your digital tokens from anywhere. You login to Bitski through an ordinary browser or mobile device, then view all of the tokens in your wallet. Bitski also displays any collectible items you might have earned across any games. The wallet also lets you send tokens, and you can view a list of previous transactions you have made.

The big advantage of Bitski is that you no longer have to juggle multiple wallets across multiple dApps. You don’t have to transfer tokens constantly between games. Instead, any dApp that supports Bitski will let you carry tokens between your games. It’s a single sign-on that lets you earn something in one game and sell those tokens in another game.

Bitski is currently partnering with app developers. App developers can visit docs.bitski.com to get started. A developer can use Bitski to create user-friendly, cross-platform Ethereum apps. As the official website explains:

“Using Bitski, you can build a decentralized app or game that feels just as easy to use as a standard app.”

On the technology side of things, Bitski provides developers with access to the Ethereum network through Bitski’s hosted nodes, then provides access to the user’s wallet using OAuth.

The developer can use Bitski’s SDK to request access to a user’s Bitski account. If permission is granted, then the app can then use standard tools like web3.js to interact with the Ethereum network. 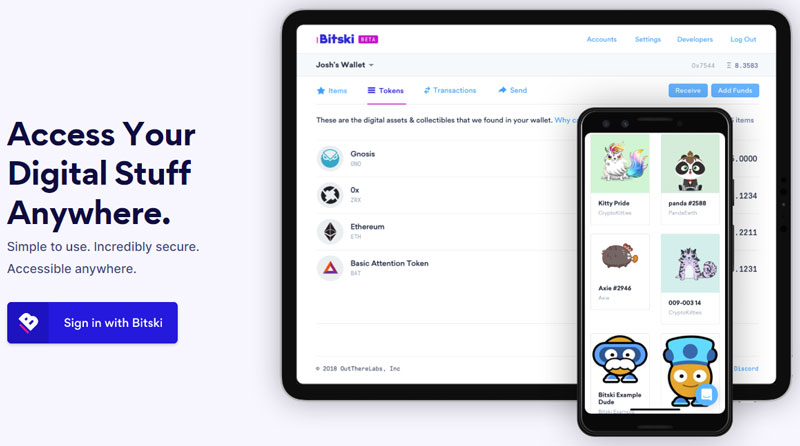 Bitski also has SDKs for easy integration with various platforms, including SDKs for JavaScript, Node.js, iOS, Truffle, and Unity.

Ultimately, Bitski provides key benefits to both the developers and users of Ethereum apps. 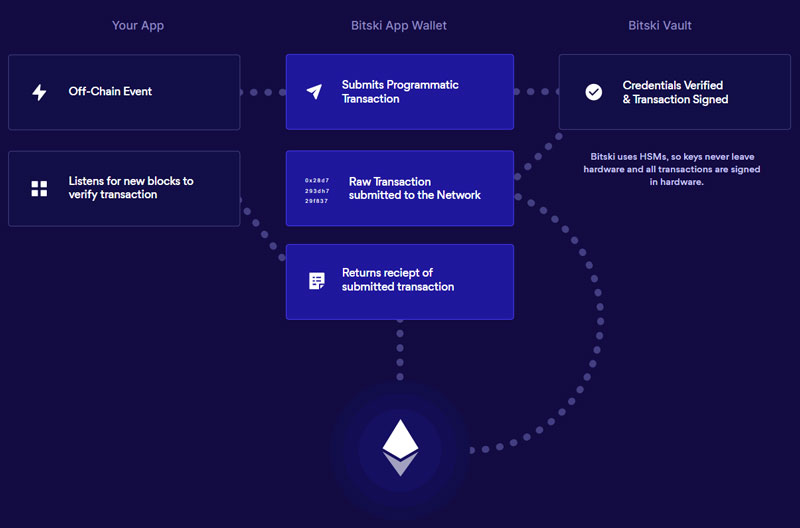 Overall, Bitski provides a solution for Ethereum that offers much easier onboarding because users do not have to install any extra software to use an app. With Bitski, using an Ethereum app is as easy as using a regular app: just install the app and go.

Bitski is currently in beta. The project is being built by Out There Labs, Inc., a software company founded in 2016 by CEO Donnie Dinch (and co-founders Julian Tescher and Steve Jang) who is based in San Francisco, California. The developer recently raised a $1.8 million seed round from investors like Galaxy Digital, Winklevoss Capital, and Coinbase. This is in addition to them raising $1.5 million in pre-seed captial from other contributors such as; Founders Fund, Signia, Village Global, Social Capital and Steve Jang's Kindred Ventures. Bitski is the company’s flagship product, although the company eventually plans to release more blockchain developer tools in the future.

Back when the Bitski first was announced and debuted back in November 2018, the CEO had this to say about the Bitski wallet benefits:

“One of the great challenges for protocol teams and product companies in crypto today is the poor UX in dApps, specifically onboarding, transactions, and sign-in/password recovery,” […] “We interviewed a ton of dApp developers. The minute they used a wallet, there was a huge drop-off of folks. Bitski’s vision is to solve user onboarding and wallet usability for developers, so that they can in-turn focus on creating unique and useful dapps.” 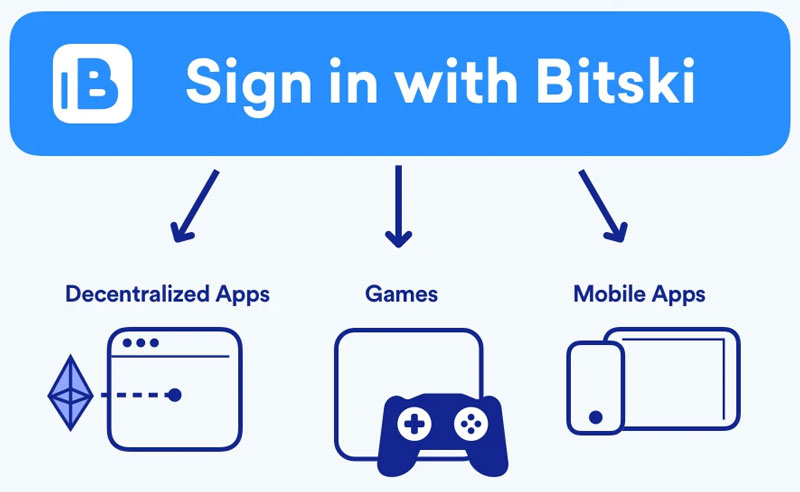 Key features of hosted Bitski wallet that is able to execute programmatic transactions include:

Easier Onboarding: Instead of having to install extra software to use an Ethereum app, individuals can use Ethereum apps as easily as using an ordinary app. All they need to do is download the Bitski-supporting app, and that’s it.

One Account for Multiple Apps: Your Bitski account is connected across an unlimited number of apps. Instead of having different sign-on and wallets for each app, and then transferring tokens between each app, you have a single wallet and dashboard from which to manage Bitski.

Cross-Platform: Bitski’s wallets are managed in the cloud instead of tied to a specific device, which means you can access them from anywhere without compromising security.

Secured with Hardware: Most wallets are stored locally on the computer or phone. Bitski’s wallets, however, are stored in tamper-proof hardware security modules. The keys never leave the hardware. Bitski claims that “this is far more secure than many of the current solutions that store your keys locally on your device and read them into memory.”

Fully Recoverable Accounts: If you ever forget your password, lose your phone, or get a new computer, then you can recover your Bitski account. Your wallet is tied to your Bitski user account.

Advantages for Developers: Bitski makes life easier for developers. It lest developers easily connect to the Ethereum network through Bitski’s hosted nodes, request access to a user’s address, submit transactions for approval on behalf of a user, create and manage wallets for an app, and deploy contracts through an app wallet, among other advantages.

Advantages for Users: Bitski is also a convenient solution for users. Users can use Ethereum apps without installing any software, store Ethereum assets in Bitski’s secure wallet, access the wallet from any device, manage access to any apps they connect and recover an account at any time. Users never have to worry about losing their digital things again.

‘Sign in with Bitski’ Button: Many Android apps let you sign in with Google to skip the account creation process. Bitski’s developers envision a similar process with their ‘Sign in with Bitski’ button. Any Ethereum app that supports Bitski will have this button, and users will easily be able to access their Bitski account through any app.

Further Developer Support: In addition to its SDKs, Out There Labs has a blog for developers, documents, an FAQ page, a dev portal, and an open GitHub page.

Superior to Exchange Wallets: Bitski is superior to exchange wallets because it’s embeddable in any app and supports all ERC20 tokens and NFTs. It’s also a self-secured solution that doesn’t require trusting an exchange.

Superior to Browser Extension Wallets: Bitski is superior to browser extension wallets because users can log in with an email and password and users can’t lose their keys. Plus, Bitski is a hosted solution.

Superior to Hardware Wallets: Bitski is superior to hardware wallets because users can log in and access funds with an email and password, it’s embeddable in any app, users can’t lose their keys, and it’s a hosted solution.

Superior to dApp Browsers: Bitski sees itself as a better option than dApp browsers because users can log in with an email and password, it’s embeddable in any app, users can’t lose their keys, and it’s a hosted solution.

Funded by Some of Crypto’s Best-Known Investors: In November 2019, Bitski announced that it had received $1.8 million in seed funding from Galaxy Digital, Winklevoss Capital, and Coinbase.

Bitski requires a username and password to register a wallet. To login to your Bitski account, just install a Bitski-supporting app and tap the ‘Sign in with Bitski’ option.

Custom pricing is also available for companies that do not fit into one of the three subscription plans listed above.

Bitski Ease of Use

Bitski is easy for developers to use. There are SDKs available for JavaScript, Node.js, Truffle, iOS, and Unity. Bitski is also easy for users to use: as a user, all you need to do is install a Bitski-supporting app then tap the ‘Sign in with Bitski’ option. There are no further steps required.

Bitski is transparent about all aspects of its development, and the company publishes its documents online. You can view Bitski’s GitHub page here.

Bitski User Guide: How to Setup and Use Bitski

As a user, you’ll use Bitski when you install an Ethereum app that supports Bitski. If you already have a Bitski account, then you can simply click ‘Login with Bitski’ to connect your Bitski account to that app. Once you’ve done that, your Bitski Ethereum wallet will be connected to the app, letting you access your Ethereum tokens directly from that app. 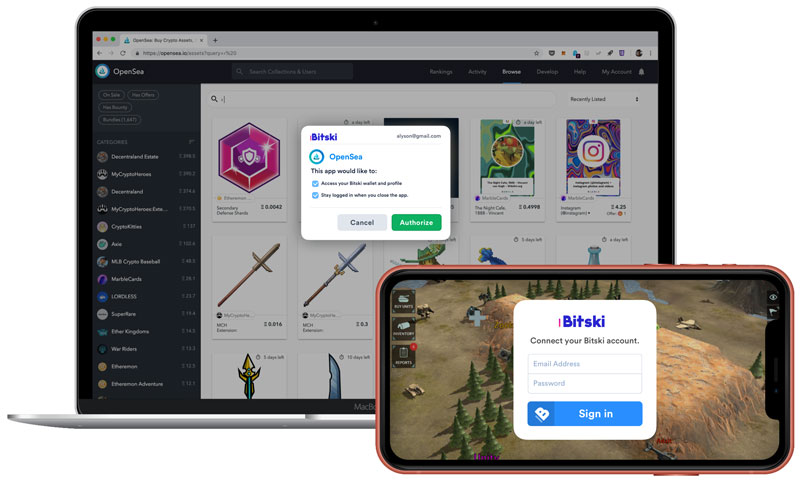 Out There Labs has released several SDKs with further details on how to integrate Bitski into various setups. There are SDKs for: 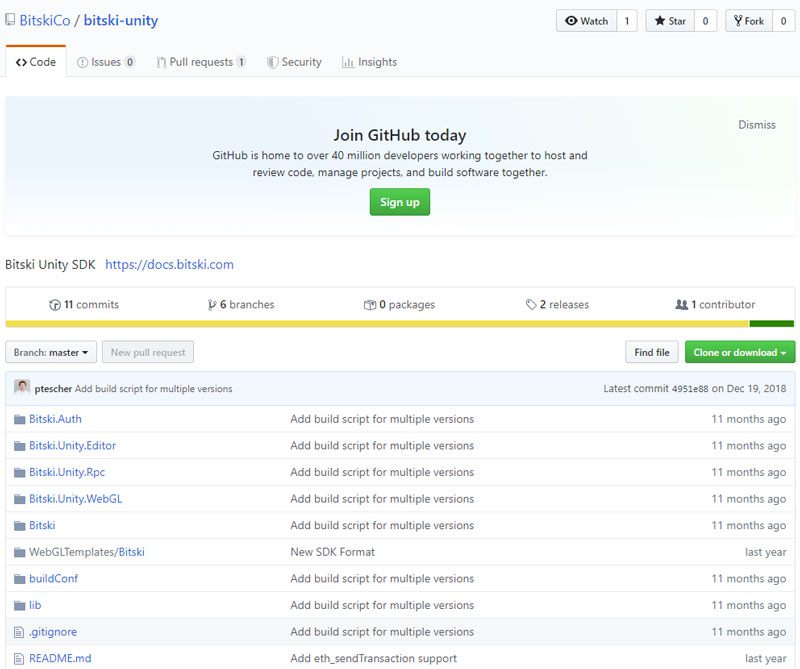 In addition, Bitski has launched a Dev Portal, blog, documents page, and GitHub for developers. 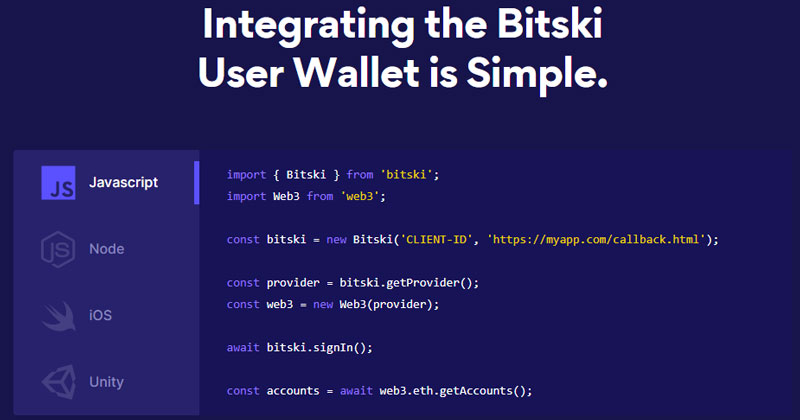 Bitski could change how the world accesses Ethereum apps. It’s a game-changing Ethereum wallet that links all of your Ethereum apps together with one simple wallet. As a user, you can avoid transferring tokens between Ethereum wallets or setting up different logins for different apps. Instead, using an Ethereum app will be as easy as using a standard app: just install the app and go.

Developers, meanwhile, can use Bitski to connect to the Ethereum network through Bitski’s hosted nodes and request access to a user’s address.

While popular hardware wallets such as Trezor and Ledger dominate in the space, Bitski is currently in beta, although the company just raised $1.8 million from three of the best-known investors in the cryptocurrency space (Coinbase, Winklevoss Capital, and Mike Novogratz’s Galaxy Digital). Bitski could legitimately change the way we manage Ethereum apps and Ethereum tokens in the future.